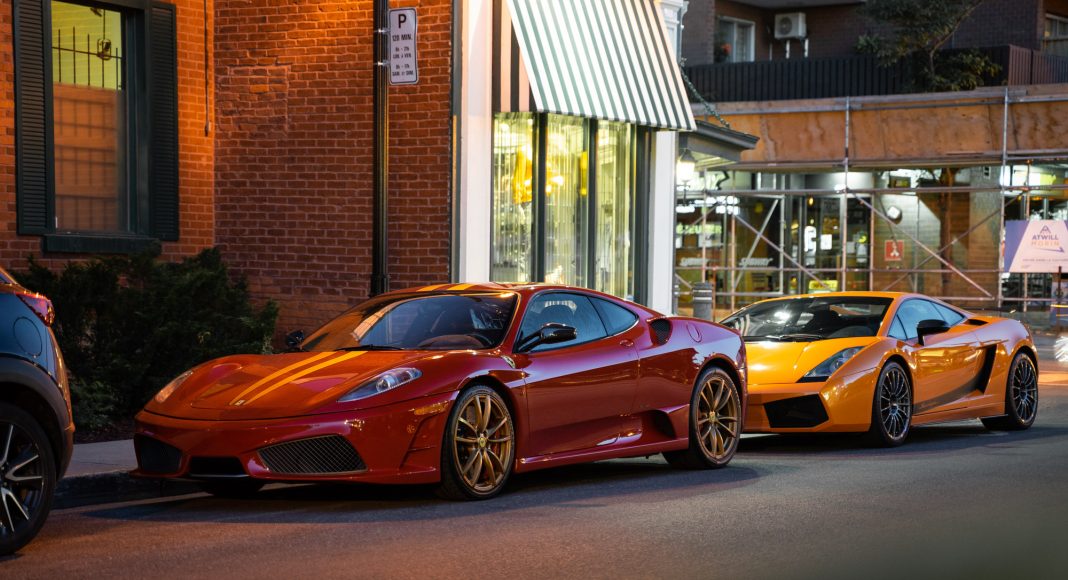 2020 was no ordinary year, and I don’t have to say why. Despite everything that happened last year, it was a pretty good one for car spotting. Sure, the Canadian F1 Grand Prix, also referred to as the most prolific car spotting weekend of the year, was cancelled, but it didn’t stop me from spotting over 850 different cars, without even counting car meets and other events. As a result, I have decided to compile a list of my 20 favourite spots of 2020. As you will see, there is a diversity of vehicles that made the list since I love all kinds of cars. Also, the vehicles are listed in no particular order as it would probably take me a few days just to decide the top 3. So sit back, relax, and let the list begin!

Ok, so this one is very special to me. I’ve wanted to spot this car on the streets for so long, and it happened a few years back during Grand Prix, back when the car was still yellow. It then happened last year as well, again during Grand Prix, this time riding side by side a Laferrari on Sainte-Catherine. This year, though, it was just during a normal weekend, I’ve waited for it for quite some time before it left the underground parking of the Four Seasons, but once I heard the engine noise from outside, I knew what was coming. The Pléthore was also completely conceived in Quebec and features a central driving position, like the McLaren F1.

This is such a weird one because the Centennial was never sold in North America and it being a 2007 model, it shouldn’t be allowed to be imported and registered here until next year. Even stranger, according to the seller, this car has been here since new and was even shown in Hyundai showrooms. Allegedly, Hyundai themselves brought the car here and it is completely legal and registered. How? I have no idea. Even more surprising, the car has 90,000 kilometres on it and has never been seen anywhere before. It was, and probably still is, for sale at a small used car dealership in Longueuil.

This one doesn’t really need an explanation, C1 Corvette’s are such good-looking cars and there are rarely seen just out and about. I drove around trying to find a parking spot for like 10 minutes just so I could take photos of this gem.

I feel like the Esprit is such an underappreciated car, it is just so cool. This particular example is a V8 Final Edition and it is one of only 39 cars built-in 2004. Out of the 39 cars, only 5 were sold in Canada, this very car being the last Esprit to be sold brand new in Canada. Very special car.

The Lambo had been spotted several times, and one night I decided to go see it by myself. Imagine my surprise when I saw the Scuderia parked in front of it, which was highly unexpected. A bit further down the road was also parked a Porsche 997.2 GT3 RS, which is also owned by the Superleggera owner. Oh, and I had the incredible luck to sit in the Lambo, which is surprisingly comfortable.

What. A. Car. 1950s cars are just not seen outside of classic car shows, especially not parked in downtown Montreal. So when I saw this thing around the corner, I know I had to park and take photos of it. It was also a great occasion to include my car in the background, which looks tiny in comparison with the Buick.

I got to be honest with you, when Avo, the owner, started to post photos of this car with the wheels and the wrap, I wasn’t so sure about the look. But when I saw it in real life for the first time, my opinion changed completely, the wheels suit the car perfectly and give it such an aggressive look. Also, this very 918 is most likely the only one with a Techart steering wheel in the world. I’ve personally never seen photos of another one.

Holyyyyy, this was a close call. I was on Montreal Car Spotting when I saw photos of this Ford GT that had just spotted in downtown Montreal. Without even thinking twice I picked up my gear, stopped by to pick up a friend and drove as fast as the law allowed me (ish) to where the GT was parked. I think I ended up having like 8 minutes before the car left, I was very happy that I still got good shots of it, and I can’t wait to see another one.

Let me tell you something, I saw this thing from far and had not a single idea of what it was, and, frankly, I’m still unsure. For starters, the Strato Chief is a pretty uncommon car, so much so that it doesn’t even have its own Wikipedia page. From what I can cater, the Strato Chief was a version of the Star Chief reserved to the Canadian market. This one is far from normal, though. If I remember correctly, it sits on a Ford Explorer/Lincoln Navigator chassis, which explains why it’s so high from the ground. It also has a Dodge Cummins diesel engine under the hood, which is completely insane. The rat rod look is just the cherry on the sundae.

Ouf. This must be one of my favourite random spots from the past couple of years. E55 AMGs are pretty uncommon in general, but the W210 generation is just impossible to find. The gentleman who owns this car was so happy to see how enthusiastic I was when I saw it, he was smiling ear to ear talking to me about his car. Classic AMG cars are some of my favourites automobiles in the world, and this is certainly one of them. Now, I have to find an E55 AMG Wagon.

If you follow me on social media, you already know that the R63 AMG is my favourite car in the whole world. The idea of a six-seater minivan equipped with AWD and a 503-hp V8 that can reach 100 km/h in 4.6 seconds is just so crazy to me. No one knows the exact numbers, but the consensus is that only approximately 200 R63s were sold worldwide, which makes it one of the rarest AMGs ever made. One day I will have one, mark my words.

This is a pretty cool one, obviously, this was never sold in North America. In fact, it was sold new in Switzerland and then imported by a friend of mine here in Quebec named Ben. It is equipped with a 2.5L diesel engine paired to a 6-speed manual transmission. It is far from being the most valuable car on this list but it is definitely one of the rarest.

Well, that’s quite the combo. Not only all of those cars are owned by the same person, they’re all extremely limited models that are rarely seen out and about, generally. Since I had already seen the Laferrari a few times, the highlight for me was the F12tdf, it is such a crazy car and I wish the other ones we have here would get driven more often.

I completely missed my exit when I saw this thing drive by me. I just had to get a photo of it, since it was my first time seeing one. This car, like the Trafic, was also imported here, I don’t know from where, though. It appears to be in somewhat of a rough shape but the owner was flying and I had issues catching up with my 1985 Olds! Interesting fact, the XM was designed by Bertone, who also designed the iconic Miura and Stratos.

Don’t throw rocks at me, but this is one of my favourite cars on this list. And one of the reasons for that is because it’s also one of the rarest. Apparently, Mini only sold 50 Clubvans, which is an excessively low number of vehicles (thanks Doug DeMuro for the information). All of them were very basic, with the less powerful engine and automatic transmission. I would be surprised if I see another one anytime soon.

I think I could just let this picture speak for itself but instead, I will add a word or two. Outside of North America, the Monza SP1 and SP2 can legally be driven on the road, unfortunately, it is not the case here in Canada. I took these photos on the Circuit Gilles Villeneuve, where the car was trailered to for a video shoot. The Circuit being part of the public road system when unused for racing, this is one of the very rare occurrences where you will see one of those driven on the “public road” in Canada. Combined, the Monza SP1 and SP2 are limited to 499 units worldwide. Yes, the Mini is rarer, but I would be willing to trade a bit of that rarity for the experience of driving one of those whenever I want.

I wasn’t expecting this at all when I left work that day. I was driving down on René-Lévesque when I saw this very low white car coming in the opposite direction. When I realized what it was, I quickly pulled a U-turn and followed it to a very nearby hotel where this photo was taken. In my opinion, the Murci is so much cooler than the Aventador and I wish I could see more of them, especially an SV, which I have yet to spot.

I bet you weren’t expecting to see an old Volvo station wagon on here. I randomly found this beauty picking stuff for the office, and I just had to stop. There are still several older Volvo’s out there, but wagons in such pristine condition are rare. The GLT was the sportier non-Turbo trim available for the 240, seeing one in Estate form is definitely uncommon. This is definitely another dream car of mine.

Let me start by saying this; I’ve spotted this and the next car in the same half-hour. I simply couldn’t believe my eyes when I saw this thing coming towards me. For those of you who might not be aware, Singer takes Porsche 964s and takes everything out to only have the unibody, on which they build a whole new car. They are some of the most highly personalizable cars on the market, and every car is unique. At the time I saw this car, it was for sale at Auto Etcetera for $1.4 million, it has found a new owner since.

I would have never guessed that I would see a 300 SL right after the Singer, this is the kind of stuff that usually only happens during Monterey Car Week. The 300 SL is considered by many as being the first supercar ever made, and even after more than 60 years, it still looks astonishing. Something cool about this particular car is that it was sold new in Montreal and it’s still in Canada to this day, owned by a notable car collector in Ottawa. A 300 SL in great shape can easily reach $1.5 million at auction and the owner of this one already drove it from Ottawa to Montreal, which is something I can only admire.

So there you have it, my 20 favourite spots of 2020! To see the other 830+ notable vehicles that I spotted last year, click here to view the full album on my Facebook page.

https://www.youtube.com/watch?v=TvnoEkSotE0 It may be hard to believe, but many people seem to forget...
Read more
Journal

https://youtu.be/nmUQNWy-CKA Since its debut in 1998, the Cadillac Escalade has truly become a...
Read more