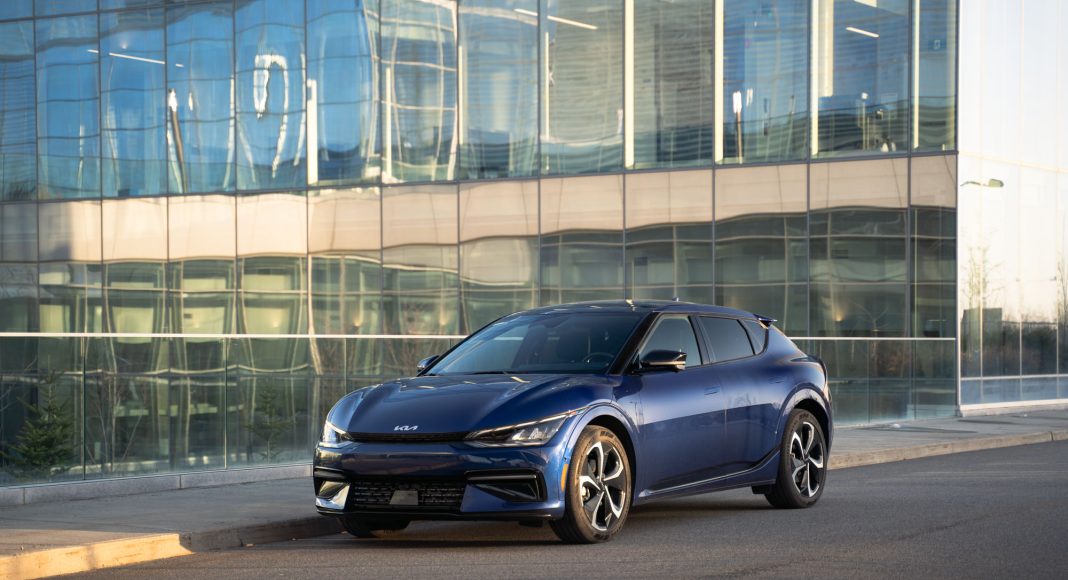 Back in 2000, Kia arrived in Canada with only two cars; the Sportage and the Sephia. A compact sedan and an SUV that didn’t impress the local press—at all. They were cheaply made, loud and didn’t have much going for them besides a very low price. Since, Kia has come a very long way, and today they sell impressive products that are extremely popular. Unfortunately, for many people, they still have a stigma from their first vehicles, a stigma slowly going away but a stigma nonetheless. Looking at the Kia range today, we have the vastly popular Telluride, the impressive Stinger, several sedans and SUVs and a bunch of green vehicles including the EV6. I got my first experience with an electric car behind the wheel of the EV6, and let me tell you, it isn’t “still a Kia”.

Starting with the design, it’s clearly not for everyone, but I love it. It is so futuristic, yet not obnoxious, and that blue—superb. My favourite part of the exterior is the line formed by the tail light which goes through the wheel and ends in the bottom part of the front doors, nothing like I’ve ever seen before. I’ve spent a solid amount of time looking at the EV6, and I honestly couldn’t find a bad angle, they really did a great job and I feel like it’s less controversial than the Ioniq 5, which shares the same platform as the EV6.

After being impressed by the exterior, I took a seat inside and was taken by surprise once again. I truly was fascinated by the overall conception with the floating centre console, the lights, the pattern on certain panels and the oddly shaped steering wheel, truly unique features that I love to see. All of those things combined can seem slightly overwhelming at first but I got used to it fairly quickly. In the middle of the car sits the dual curved display which includes two 12.3-inch screens, one for the cluster and one for the infotainment. I absolutely love the way those screens work, they are highly intuitive, responsive and configurable.

In the infotainment screen, you have access to several features including an EV menu, voice memos, your phone, as well as radio and climate controls. The good thing is that you can access both the radio and climate controls without having to go in the infotainment screen since there is a panel underneath it that takes care of both. Starting the EV6, the panel will display the climate controls, with the left and right dials adjusting the temperature for either the driver or the passenger. Between the dials, you get all of the normal climate controls, nothing to write home about. Touch a button and the entire panel changes to now display your radio controls! The same left dial now adjusts the volume, and the right one is your radio tuner, pretty cool! That also means you can’t have both at the same time, which wasn’t an issue for me, but thought I’d point it out. If you’re planning on having rear passengers often in the EV6, you are going to be happy to know that the rear seat is big, massive in fact. Whether it’s legroom or headroom, the EV6 has it—great packaging. At the image of the rear seats, the cargo area is very large, but there isn’t much vertical space, which is often the case with vehicles with a sloping roof. Before jumping to the drivetrain, I need to mention how great the interior felt, I was not expecting such great build quality and materials, definitely a highlight.

Powering the Kia EV6, Long Range GT Line in this case, is a 320 hp, 446 lb-ft of torque electric drivetrain that drives all four wheels, allowing it to do 0 to 100 km/h in as low as 5.2 seconds. Impressive numbers for a simple electric crossover. There are also several other trim levels with less power and RWD instead of AWD. Not only is it quick, but it also has great range, the EV6 LR GT Line has an estimated range of 441 kilometres! I drove it for a week, and never got range anxiety, even though it was my time experiencing an electric car.

If you’re in the market for an electric crossover, the EV6 should be on the top of your list, it’s a fantastic vehicle with great tech, futuristic design throughout and an impressive drivetrain. There is also a 577 hp EV6 GT, which I can’t wait to drive.