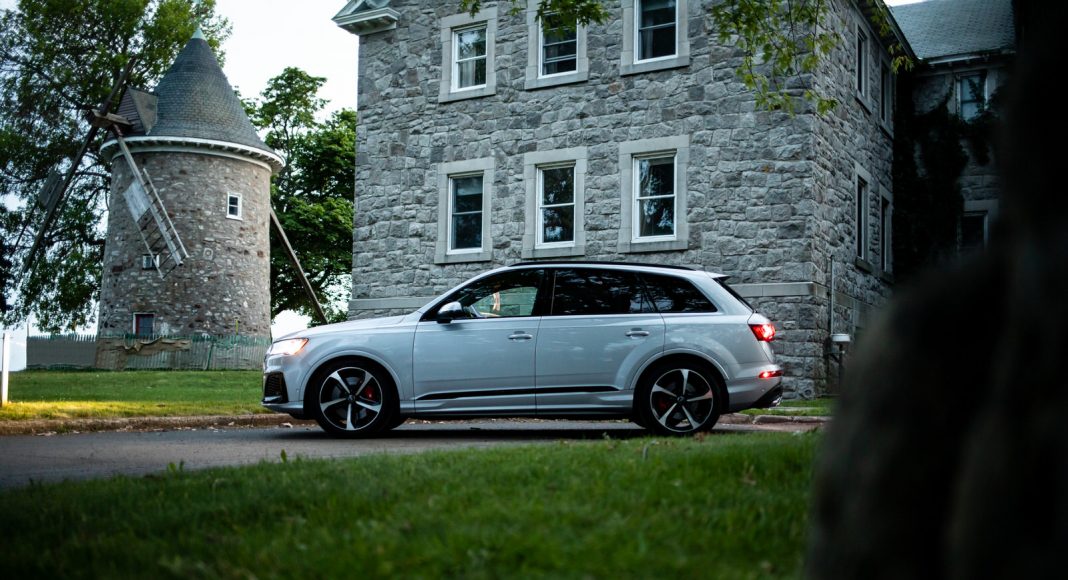 Over the years, I have had the opportunity to spend time with the second-generation Audi Q7 (that has been on the market since 2015) on numerous occasions. From its refined exterior and interior design to Audi’s brilliant technology, the Q7 is simple and elegant throughout, and most importantly, comes with a third row. In my books, it’s always been a very good SUV, however, with its most powerful engine being a turbocharged V6 that produces 335 hp and 369 lb-ft of torque (0-100 km/h in 5.9 seconds), I always found that a more powerful variant version was missing, and very much needed for North American consumers. Luckily, as Audi is in the process of refreshing their entire lineup and adding sportier variants to the majority of their models, the introduction of the facelifted 2020 Q7 has resulted in them offering a more powerful Q7 for the first time on this side of the Atlantic; say hello the SQ7 (finally)!

So what is the SQ7? In short, it’s everything I love about the Q7 now with a sportier configuration that includes 21-inch wheels and quad exhaust tips as standard. Most importantly, the SQ7 is powered by a twin-turbocharged 4.0-liter V-8 engine that produces 500 horsepower and a whopping 568 lb-ft of torque! With those power figures, this three-row SUV propels to 100 km/h in only 4.3 seconds; not too shabby for an SUV that has a towing capacity of 7,700-lbs. Ladies and gentlemen, this thing is no slouch and it sounds exceptional with plenty of burbles as well as the occasional crackle in between. Handling wise, thanks to standard quattro all-wheel drive, all-wheel steering and the engaging ‘Dynamic’ mode from the Audi Drive Select (the most enjoyable setting), the SQ7 truly shines resulting in stiffened suspension and ultra-precise handling that made me forget that I was driving a seven-passenger SUV; especially on winding roads.

Interior wise, the sportiness found in the exterior is carried throughout thanks to the premium Valcona leather with embossed S logo and diamond stitching that is not only comfortable but extremely well-bolstered as well. My favourite feature of the interior is Audi’s new MMI system. Compared to the previous system, the new Audi MMI now features dual touchscreens. This was my first time experiencing the system for an extended period of time and I have to say, I was very impressed at how simple it was to use, and the fact it has haptic feedback is a really nice touch (no pun intended). Other features include standard Apple / Android Auto, wireless charging and a premium Bose sound system (there is an optional Bang & Olufsen system as well). As there is seating for 7 passengers, the premium materials are continued for rear occupants that have an ample amount of legroom and headroom in the second row, as well as a sufficient amount of room in the third row as well.

Overall, I was thoroughly impressed during my time behind the wheel of the SQ7. With impressive performance figures that complement the sporty and refined exterior and interior, this model was much needed in the Q7 lineup. Compared to other vehicles in its class such as the Mercedes GLS 580 and BMW X7 M50i that both start at around $125,000 CAD before options, the SQ7 proves to be tremendous value with a starting price of $104,750 CAD. Well done Audi! Now only one question remains, is an RSQ7 in the works? One can only hope.