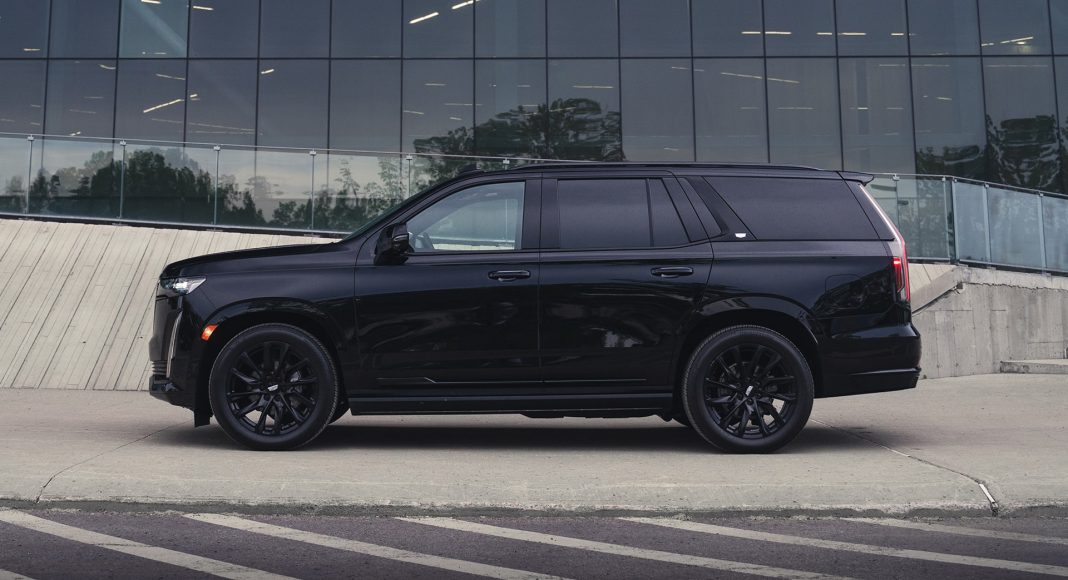 Since its debut in 1998, the Cadillac Escalade has truly become a status symbol in the world of luxury SUVs. Think about it. It seems like nearly every rapper and their mother has had at least one Escalade throughout their career. With dimensions that are comparable to new construction condos in Montreal and a grille like no other, an Escalade commands presence everywhere it goes and can be spotted from a mile away. Okay, clearly I’m overexaggerating, but you get the point. The question is, does the new, 5th generation Escalade still have that allure compared to the previous generations? I recently had the opportunity to spend a week behind the wheel of one, and in short, the answer is, yes.

The variant I had the keys to was the Sport Platinum trim level which includes everything you would find in the Platinum trim level with the addition of blacked-out exterior trim pieces, along with black 22’ inch wheels. Along with the fact that the exterior was also black, let’s just say it was very intimidating to be around it, and other drivers near me simply moved away, no questions asked.

Speaking about moving, powering this behemoth is a 6.2 L V8 that produces 420 hp and 460 lb-ft of torque. As a result, the Escalade propels to 100 km /h, in a very respectable 6 seconds flat. Fuel economy? Please don’t ask, but in case you do, you’ll be happy to hear that there is a 3.0 L Duramax turbo diesel available, and there’s news floating around that a plug-in electric version is currently in development. Drive-wise, the Escalade may not be the most agile, however, it handles the road with ease thanks to Cadillac’s magnetic ride control, air ride suspension, an electronic limited-slip differential, and an independent rear suspension. With all these systems in place, the Escalade simply glided through Montreal’s inconsistent roads. I will also say that the steering was extremely light and the turning radius was impressive as well, even on the narrowest roads.

Step inside and the first thing you will notice is the massive, 38” Curved OLED display manufactured by LG. This is the first time ever that a curved OLED display has been used in a production vehicle. Divided into multiple sections, the screen located by the steering allows you to change it to four different view modes: Gauge View, Navigation, Augmented Reality with Active Route, and lastly, Night Vision. As this was the first time that I ever experienced Augmented Reality in a vehicle, that was the screen that I found myself constantly choosing, in particular when showing the vehicle to friends and family. At first use, it is distracting, however, as my week with the Escalade progressed, and especially due to the size of the SUV, I found it very handy especially paired with the digital rearview mirror which gave me an overall wider field of vision, in particular when switching lanes on the highway.

Besides that, the Escalade is equipped with a slew of options that you would expect. A few of my favorites were the heated and ventilated massage seats (perfect for long journeys or your daily commute to work), a built-in mini-fridge in the middle center console (ideal for bottles of Fijjii or Evian water), as well as an AKG Studio Reference system that comes equipped with 36 speakers and three amplifiers that deliver a truly 3D surround sound experience throughout the cabin (for when you want to listen to your mixtape before releasing it to the general public). Even though it comes complete with an ample amount of leather and wood throughout, my main downfall with the interior would be that there are still quite a few places where hard plastics are present, and I find the overall finish of the buttons and knobs could have been a tad better.

My tester also came equipped with the optional Rear Seat Entertainment that came equipped with two touchscreens for the 2nd-row occupants to view and listen to the media from their smartphones. For Apple users, there’s a wire that comes with the vehicle, and Android users can connect to the system wirelessly. I’ve said it once, and I’ve said it again, I hope that manufacturers will allow Apple Carplay / Android Auto available for their rear entertainment systems in the very near future.

Due to the new independent rear suspension and a longer wheelbase, the third-row legroom has increased by more than 10 inches, which makes the third-row seating in the 2021 Escalade one of the roomiest in its segment. In terms of cargo space,  With both rows of rear seating stowed away at the push of a button, there is a total of 3,427 L of cargo space. In the ESV model, the total cargo space increases to a whopping 4,044 L.

With a base price of $117,798, with all the extra goodies, the Escalade Sport Platinum came in at a price of $125,068. At that price point, the European competitors may offer more agile vehicles that come with more refined interiors, however, nothing has the presence and status that an Escalade does. To learn more about the Escalade, be sure to view my video review!