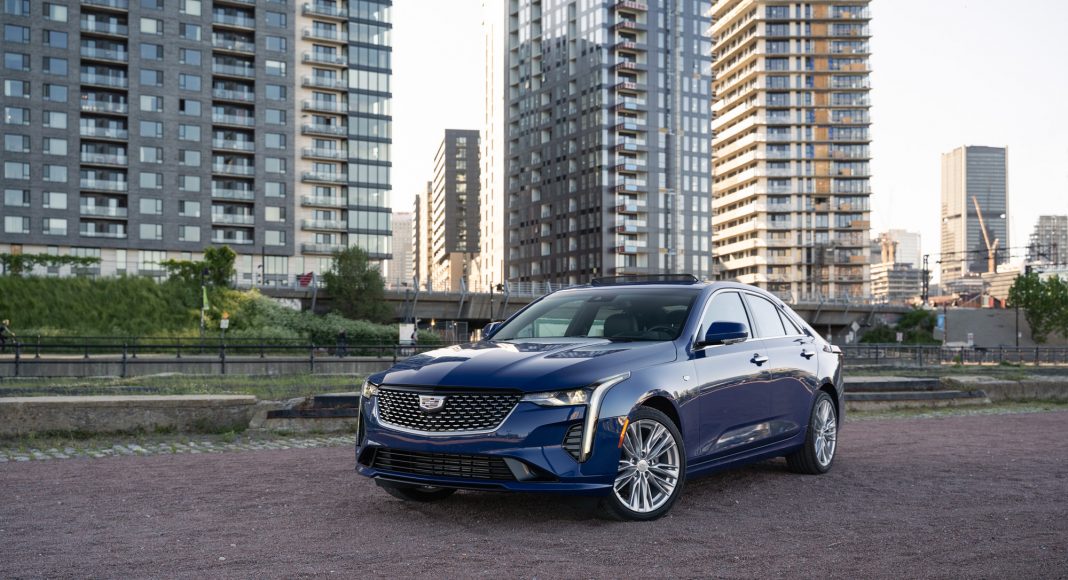 When you think of Cadillac, you might be reminded of your grandfather’s Fleetwood or DTS. A large, heavy, and soft-riding land yacht. That’s not today’s Cadillac, though! For the past years now, the luxurious division of GM has been doing their best to change their brand image to attract a younger clientele, selling cars that are more dynamic with head-turning design, and increased personality.

The Cadillac CT4, which launched only a few years ago back in 2019, is a great example of that transformation. The car I had was a 2021 CT4 Premium Luxury, the most luxury-oriented model of the CT4 lineup, and it came equipped with a lot of stuff, but maybe not everything you would expect from a luxury sedan with an MSRP close to $40,000—my press car having a window sticker of around $50,000.

Let’s start with the looks, in my opinion, the CT4 is a very handsome compact sedan, especially painted in that great shade of blue which Cadillac refers to as “Wave Metallic”, definitely one of the best colors for it. The front and profile views are very well designed and while the appearance is striking and sporty, it remains obvious that you’re staring at a Cadillac. I got a surprising amount of attention driving it around, way more than I thought. I caught people looking, kids pointing at it, and even had someone asking questions about it at a red light. Maybe it’s the headlights that caught people’s attention, they might actually be my favorite part of the car’s exterior. The only downside for me is the rear of the vehicle, there is a lot going on and while other manufacturers are getting creative with ways to hide the backup camera, Cadillac decided to leave it right in the middle of the trunk cover, kind of a strange stylistic decision if you ask me.

Step inside the CT4 and you will discover an interior that, on the opposite of the exterior, does not scream “Cadillac”! It’s pretty bland, actually. There are also some cheap plastics here and there, but nothing that would stop anyone from enjoying spending time in the car. In the CT4’s cabin, my highlights were the seating position, and the seats themselves. They are very comfortable and supportive, as well as cooled and heated, I wouldn’t mind seating in them for several hours at a time. Being 5’11, I had to move the seat back a bit, which removed almost entirely the legroom for the back seats, the headroom not being much better, you wouldn’t want to be an adult sitting back there. Looking at the photos of the car, you will notice that the C-pillar on this car is quite large, which is even more apparent sitting inside the car where the all-around visibility is not the greatest, especially from the back.

Being the owner of nothing earlier than 2010, I’m not used to infotainment systems, but the CT4’s CUE (Cadillac User Experience) was extremely easy to use and highly responsive, I got the hang of it in a few minutes and never had an issue with it for the rest of the week. At eight inches, it might not the biggest infotainment screen out there, but I thought it was a good size. Considering the size of the car, you don’t need more than that. The fully digital twelve-inch instrument cluster is a great touch, it works well, and is very configurable. Note that there is no way to get a power-closing trunk, no matter the trim level.

Under the hood, the Premium Luxury can either have a 310 hp 2.7L Dual Volute Turbocharged 4-cylinder engine, which is paired to a 10-speed automatic transmission, or a 237 hp 2.0L Turbo 4-cylinder engine, which is paired to an 8-speed automatic transmission, my car was equipped with the latter. In both situations, you can choose between RWD or AWD. I found the engine to be surprisingly peppy, good for city driving and going from traffic light to traffic light with ease, fuel consumption was very good, too. Though I found that it was lacking torque at higher RPMs, so the 2.7 might be a better choice in that sense. At first, I thought the different driving modes were there just for show, but they change how the car behaves considerably, especially if you go from “Tour” to “Sport”. You’ll find that the steering wheel gets heavier, and the brake feeling changes as well, definitely not a simple gimmick.

Overall, I find the CT4 to be refreshing and a good rival to the other cars in its category, if you’re looking for a compact luxury car that will turn heads, that’s both sporty and comfortable and features great, easy-to-use tech, the 2021 Cadillac CT4 might just be the car for you. You will have to close the trunk yourself, but if you can get over that, you will end up with a great car.