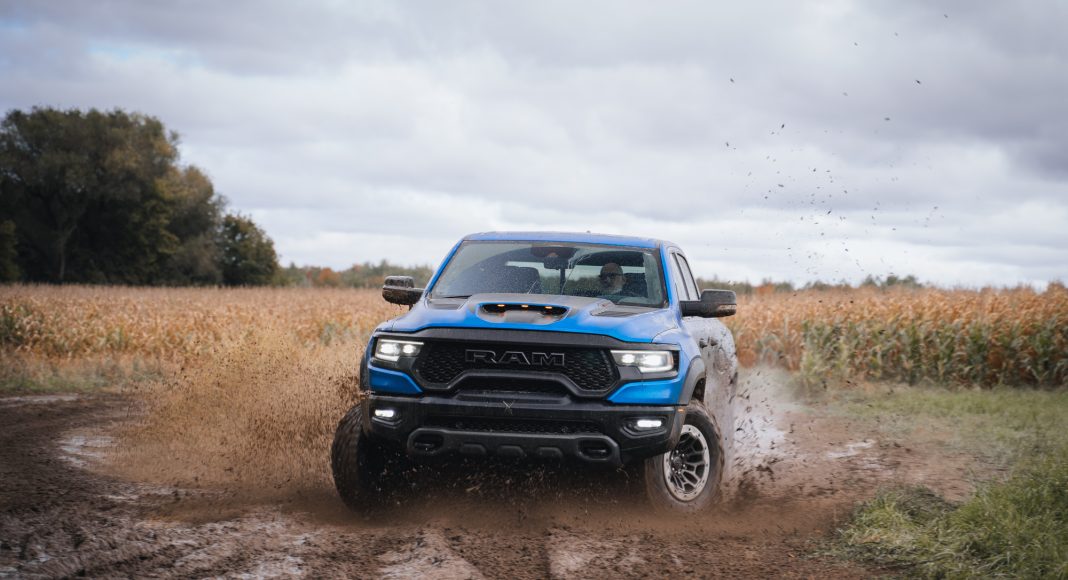 In a world where most car manufacturers are developing electric cars and smaller,  more efficient engines, other brands are doing their best to give the combustion powertrain its last hurrah. Some companies are achieving this by creating new, insanely powerful crate motors and some others are taking their already well-developed, insanely powerful engines and trying to make them fit in as many vehicles as they possibly can. One of the manufacturers that have been known for doing that—a  lot—is Stellantis. With its first appearance in the Challenger and Charger Hellcat models in 2015, the 707 hp supercharged Hellcat V8 then made its way in the Grand Cherokee Trackhawk’s engine bay 3 years later, which was already pretty impressive. In 2021, something even more unexpected happened: the Durango Hellcat, but this wasn’t all 2021 had to offer when it came to huge Hellcat-powered vehicles. The most ridiculous one of them all—so far—is this article’s subject; the 2021 Ram 1500 TRX.

You know a truck is going to be pretty good when its name is a direct jab at a rival’s vehicle (cough, cough, Ford F-150 Raptor); the T-Rex being a way more imposing, and powerful dinosaur than the Velociraptor. Talking of power, what’s underneath the hood of the TRX is what makes it so special, a slightly detuned 702 hp supercharged  6.2 L HEMI engine that sends this behemoth from 0 to 60 mp/h in 4.5 seconds, thanks to launch control, making it both the fastest production truck of all time and the most powerful production half-ton truck ever built. ‘Murica. I simply couldn’t get enough of the supercharger whine every time I pressed on the gas, the exhaust also sounds outstanding. That being one of its biggest upsides, it brings me to one of its biggest downsides; you really got to be careful when you press on the accelerator because this thing drinks 91 octane the same way your aunt drinks red wine during the holidays, yes that aunt. With the adaptive cruise control set at a reasonable speed, I managed to get the average consumption at around 23L/100 km/h, which is, yes,  revolting. If your right foot starts getting heavier, don’t be surprised to see that number quickly go over 30L.

The Ram TRX’s feats are not all about power. Thanks to its bespoke Bilstein shocks, 35-inch off-road tires, and eight drive modes, the TRX can pretty much go anywhere both on-road, and most importantly, off-road. My favorite mode is called Baja, and it gets the suspension so soft it becomes hilarious, especially combined with the immense torque of the engine. Be careful to slow down before entering a curve while using that mode because the amount of body roll might cause you to scratch your elbow on the pavement. Speaking of slowing down, the TRX features the largest brakes in its category thanks to 15-inch discs in front; they work well and the truck stays surprisingly straight under heavy braking. On top of all of that, it can also do typical truck stuff like towing up to 8,100 lbs and hauling up to 1,310 lbs in its bed, if you can get stuff around the spare wheel.

Before stepping inside, take a good look at it—it truly looks superb, the best, meanest looking truck on the market right now, in my opinion. The shade of blue that Ram refers to as Hydro Blue Pearl, magnificent. It has a very unique trophy-truck look to it, which can’t be found on the OEM market. The reason for that is how wide it is, eight inches wider than your regular Ram 1500. The vents around the truck are not only there for looks, every single one of them is actually functional. In front, a menacing black grill will make sure to scare anyone out of your way, and outback, dual exhausts with 5-inch tips will make them lose the ability to hear for a few seconds as you’re passing by.

Inside the TRX, I was surprised by how great everything felt and looked, but at the same time, as this is a $100k+ truck, a great interior is to be expected. It did feel very cozy, and I really did enjoy spending time there. The flat-bottom steering wheel features Alcantara and carbon fiber accents that feel great while driving. The leather-trimmed seats are very comfortable and definitely add to the premium feel inside. As the TRX is offered only as a crew cab, the rear passengers have plenty of room as well. You can also lift the rear bench seat and gain access to some storage underneath, which is always welcome in a truck since your cargo area is always exposed to the exterior world and your smaller items are subject to rolling around. The 12-inch screen is one of the biggest in its category, and it features Stellantis’ Uconnect system, which is one of the best systems I’ve tested so far. It truly works like a cellphone and I enjoy using it, the size of the screen truly makes it easy to find what you’re looking for. On top of all of your typical infotainment features, the TRX  also includes a suite of customizable performance and off-road pages such as the Launch Control page where you can adjust the RPM before takeoff, and a Dyno page where you can measure how much torque and power you’re using at any moment. In the center console, you will find the shifter, which is an actual shifter, not something that looks like a volume knob (a big pet peeve of mine). I did have issues putting it into the correct gear though, finding myself in neutral several times—my father, which you can see driving in the photos, had the same complaint. Keep looking in that area and you will see the plaque on the center glove compartment cover that features a plaque with the VIN of the truck and other additional information; a subtle detail that truly reminds you that you’re not driving an ordinary Ram.

Except for the terrible gas consumption, I really loved my experience with the 2021 Ram 1500 TRX and even though I’ve spent time with faster cars, I can’t recall having this much fun. A vehicle of this size should not be able to do the things this manages to do, and yet the TRX excels at all of them. Is it better than the Raptor? It’s hard to tell. They both are powerful off-road machines, but whereas the Ford appears to be more of a precision tool, the Ram is a good old-fashioned sledgehammer. The Raptor is less powerful, doesn’t look as striking, and definitely doesn’t sound as mean, but it is cheaper, better on gas, and not as wide, making it easier to drive. The choice is thus yours, if you want your truck to be the best off-road vehicle, they are both great choices, but if you want your truck to be both the best off-road vehicle and a very efficient weapon on the drag strip, then the Ram is the only one; a true super-truck.

Special thanks to my dad, who helped me get the truck dirty, and then clean again.