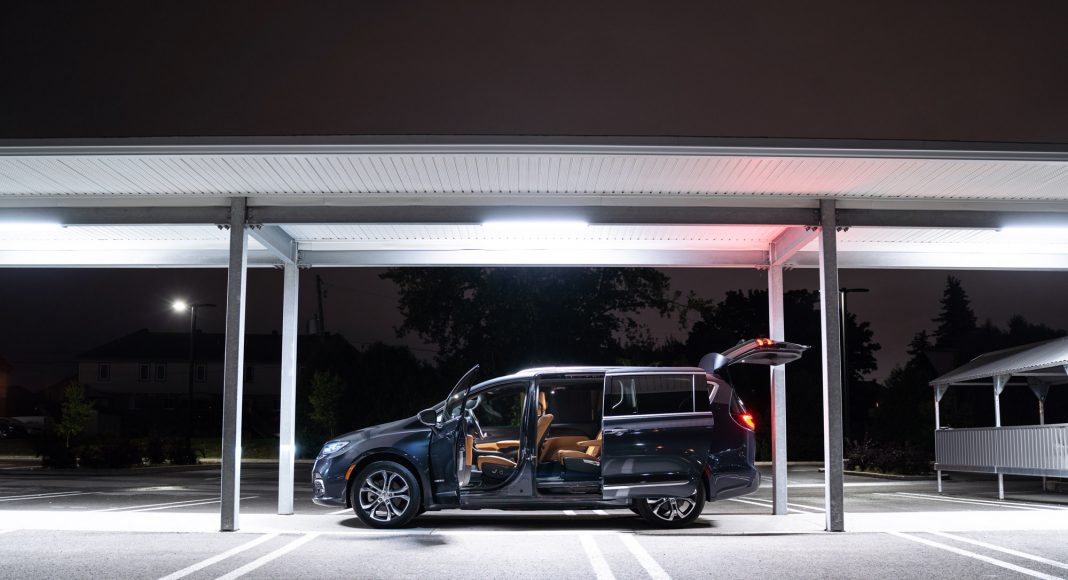 Not many people know this, but at 18 years old, the car I was driving to college with – my second car ever – was a 2005 Dodge Caravan that my dad had bought brand new. It was a silver ‘Special Edition’ which meant it was equipped with armrests on the front doors and … a TV! My dad wanted one with the TV so my brother and I could watch it on longer drives. For me, that was the pinnacle of what you could get in a vehicle and it also was a fun gimmick when I owned the car myself several years later. I really loved that minivan, the seating position was high and comfortable, it was also incredibly practical. As you read in the title, this article is about the 2021 Chrysler Pacifica Pinnacle, which is my Caravan’s younger, way more luxurious sibling, and besides both having four wheels and sliding doors, they are very different vehicles.

Let’s start with the looks. As minivans go, I think the Pacifica is one of the best, and sleekest looking ones, especially in Pinnacle trim that comes standard with 20-inch polished aluminum wheels. Combined with the ‘Maximum Steel Metallic’ paintwork, this family-mover is quite the looker. I especially like the full-width LED rear tail lights. Inside though, that is where the true magic happens. The first thing you will be struck with is the Caramel Nappa leather-faced seating, some might find it to be a bit over the top, but I like it. Note that it is standard in the Pinnacle and you can’t get anything else. Also standard are the pillows, yes, you read that right, the pillows! Just like a high-end luxury sedan, the Pinnacle comes equipped with two pillows which you can place pretty much wherever you want, they feature the same Caramel Nappa leather and, even though they are a cool quirk, I got to admit they are kind of useless. The amount of room in the back is quite surprising, even in the third row which I was able to fit into comfortably. Talking about the third row, it’s not as easy to access as some of the competitors, but since it features second-row captain seats, it’s way quicker to just squeeze between them.

Being quite an expensive vehicle – $70,000 minus $10,000 in total discount – the Pacifica Pinnacle comes equipped with several great features that include 10.1-inch ‘Uconnect Theatre’ entertainment screens, hands-free power sliding doors, and liftgate as well as a vacuum located just behind the second row! I used it and it works well, it’s also well located and makes accessing every corner of the cabin easy. What’s that? Do you find it’s too short for you? Say no more. There’s also an extension tube included.

Upfront, a third 10.1-inch screen sits in the middle of the dashboard and features Chrysler’s latest Uconnect infotainment system, a very intuitive, and responsive system that takes short to no time to get used to. I would definitely recommend it. In the Pinnacle, this screen also features Chrysler’s FAMcam, which is a camera system located on the ceiling between the rear rows which allows you to monitor what’s going on in the vehicle, you can even zoom in on each single-seat to make sure the family is doing all right without having to look behind you. Right below the screen is the gear selector, which is quite strange. Don’t get me wrong, it works well, however, it’s a big knob located right next to the volume knob and I almost shifted it in neutral at the red light trying to lower the volume of the radio. There are also USB and USB-C ports in all three rows, which makes charging your electronic devices a piece of cake.

Being a minivan, the Pacifica is a highly practical vehicle that offers several storage solutions all over the cabin, the cargo area is also very big, and deep, even when the third row of seats isn’t folded. Speaking of that, the third row can be folded flat into the floor using a button in the cargo area, it’s kind of a long process, but you don’t have to do anything. Folding the third row will give you access to a massive cargo area that can be used to carry pretty much anything, it is very good packaging.

Since it’s a minivan, it is the last thing that buyers will look at, but under the hood sits a 3.6L V6 which offers 287hp and 262 lb-ft of torque, making this the second most powerful minivan on the market, not that it really matters honestly. Something that matters quite a bit more, especially for the buyers here in Quebec, is the option of AWD! The Pacifica is one of only two minivans currently offered with AWD, which gives it a huge advantage over its rivals. It is also offered with a hybrid drivetrain, which is FWD only. Should you need even more cargo space, the Pacifica Pinnacle can tow up to 3,600 pounds.

Overall, the 2021 Pacifica Pinnacle is a pretty good-looking van offering several great family-oriented features on top of great tech and a powerful drivetrain. All of this comes with a hefty price tag though and to be honest, I’m not sure what purpose this van serves. It offers a lot of characteristics made for kids, but who would want to risk carrying young children on quilted Nappa leather seating? It’s still a fantastic vehicle, but it’s directed to a very niche market of people having to transport kids of a certain age; as a people-mover, a lower trim would be a more logical choice. Once again, I don’t quite understand who Chrysler is targeting with this, but if you’re looking for the ultimate luxurious experience, room for everyone, as well as pillows, the 2021 Pacifica Pinnacle might just be the vehicle for you.