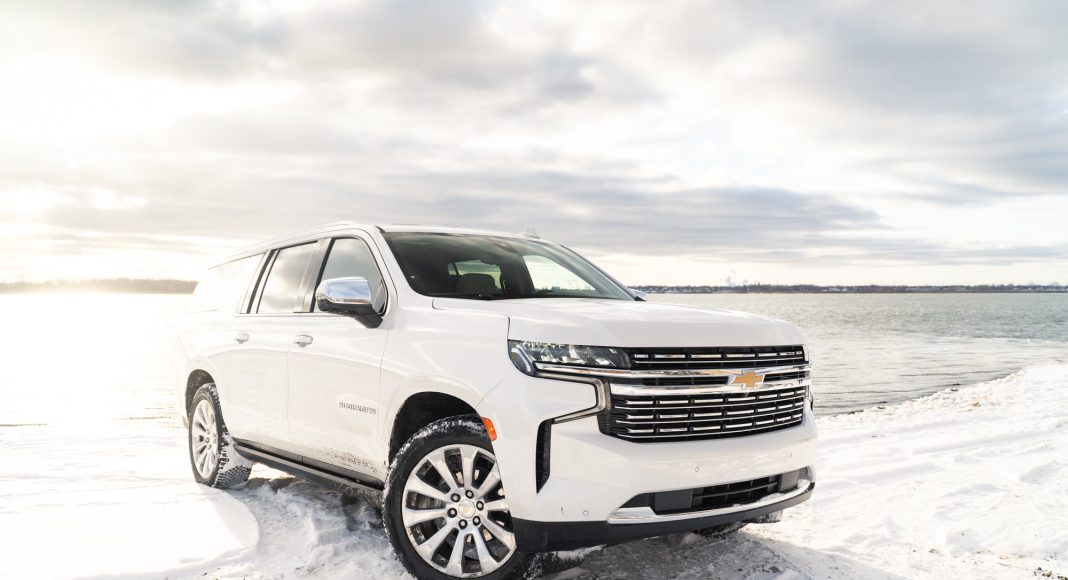 In Chevrolet’s current line-up, you can find seven different SUVs, all of them bigger than the one before it. The biggest one wears a nameplate that first appeared in 1935—Suburban. 87 years ago, it was actually called the Carryall Suburban, since it was a wagon body on top of a truck built to carry it all, the whole family and pretty much whatever they had with them could find space in this one vehicle, and even though today’s Suburban looks nothing like it, it serves the exact same purpose. The Suburban I spent the week with is a 2021 Suburban Premier equipped with the 3.0L Duramax Turbo-Diesel engine.

This was my first time spending time with a diesel-powered vehicle, and I was very surprised with the consumption, and smoothness. Having spent time with the TRX, I was expecting another salty bill at the gas station, but since it was averaging only 12L/100 km with combined highway and city driving, it wasn’t an issue at all; a very low number for such a gigantic vehicle. With 277 hp, it is not the fastest SUV on the market, but thanks to 460 lb-ft of torque, it doesn’t feel like it’s low on power in any way. It also was my first time driving such a massive vehicle, and at over 5.7m long, it was still quite easy to drive around and park, thanks to the number of cameras around the vehicle, and great visibility. You can look at the cameras using GM’s latest Infotainment Premium 3 System on the 10.2-inch touch display, a great system that I’ve used in other GM vehicles in the past; very intuitive and responsive, I definitely recommend it.

Being inside the Suburban, it’s a very comfortable place to be; you sit high and you absolutely feel like the king of the road. The seats feel great and there is—unsurprisingly—plenty of room. The reason most buyers purchase a Suburban is for the room in the rear seats which are extremely spacious. Being 5 foot 11, or 6 feet tall if you’re a girl I’m interested in, I was able to sit comfortably in the third row and I wouldn’t mind being there for longer trips. It is also very accessible. For the 2021 model, Chevy replaced the old solid rear axle with an independent suspension system, which increases room in the cargo area and third-row even more. Speaking of cargo, the 2021 Suburban offers more cargo space than any of its rivals, with around 2,660 liters of room behind the second row, and roughly 1,190 liters behind the third.

As you might expect, the ’Burban’ is not all good, in fact, if you visit Chevrolet’s website, they boast many things, including ‘First-in-class power sliding centre console’ and forward collision alert with automatic emergency braking, and both were more of a curse than a blessing for me. Firstly, the sliding centre console got stuck and started shaking for a few seconds before moving every time I tried to use it. I’m definitely worried about the long-term reliability of that feature, or even short-term, really. The second thing that failed me is the forward collision alert system which slammed on the brakes for absolutely no reason as I was driving downtown at around 35 km/h. I was very lucky that the road wasn’t icy and no one was behind me, because this could have ended quite badly. The third thing that went wrong was a check engine light two days before I gave it back, it stayed on for a day and a half, and according to the message that briefly appeared on the cluster screen, it was related to the heating system, so nothing terrible, but still disappointing for such a new and expensive vehicle (MSRP of over $82,000).

In general, the Suburban is a good vehicle, not a great one, especially at that price. If you need a truck that can carry and tow as much as this can though, there’s not a vehicle on the market that can compete, except for the GMC Yukon XL, if looks matter to you. The Duramax is a great engine and I would choose it over the 5.3L V8 as I don’t see the advantage of petrol here. Not many SUVs have quite the presence of a Suburban, but watch out not to look like an idiot as your massive SUV slams on its brakes in the middle of your downtown flex laps.