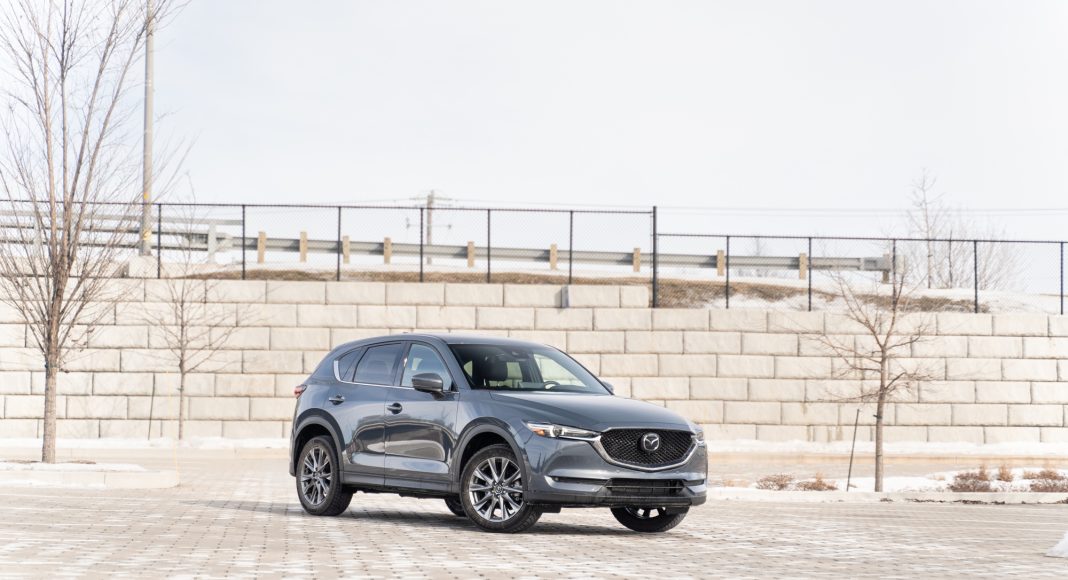 Let’s get straight into it, I’ve been driving a 2010 Mazda Tribute for the past 5 years and it’s been a complete nightmare. It’s falling apart, it’s rusty and it offers the same level of comfort as a lawnmower. Not many people know this, but when Mazda revamped the Tribute for the 2008 model year, they planned to rename it as the CX-5 and they should be glad that they did not because it would have been a shame for the CX-5 to be associated with that thing. In 2013, the CX-5 did end up replacing the Tribute which had been axed in 2011, and the 2021.5 CX-5 Signature I spent a week with is such a massive improvement; they don’t even feel like they’re from the same brand. As I said, the subject of this article is the 2021.5 Mazda CX-5 Signature, which comes standard with the Skyactiv-G 2.5 T, a turbocharged 4-cylinder engine that develops up to 250hp, yes, “up to”, I’ll explain that later.

Because of my previous experience with Mazda, my expectations were pretty low, and even though I had read great things about the new CX-5, I still had a bad taste in my mouth. The CX-5 made me forget about the Tribute in the first few minutes, it is just so good. Starting with the exterior, the CX-5 features Mazda’s “Kodo: Soul of Motion” design language and it wears it well, it is a very handsome SUV indeed. It has a feline look to it, especially from the front, which sets it apart from the other vehicles in its segment. In my opinion, it manages to look both young and mature, which is something that can be said about every new Mazda. Not only are the proportions good on the outside, but they also are inside where the premium materials make you feel like you’re sitting in a vehicle more expensive than what it really is. I really like the design of the CX-5’s cabin and where everything is located, but the legroom could be improved, being almost six feet, I didn’t have that much room for my legs, same goes for the back where legroom isn’t ideal, which is to be expected considering it’s a compact SUV, and not the roomier CX-9, but still, it’s something to keep in mind. Speaking of room, you get 875 liters of cargo space in the CX-5, which can be increased to 1,687 when folding the rear seats, easily done with the handles in the cargo area. Most of its rivals offer more cargo volume, which could be a downside, but it’s still spacious enough for it not to be a deal-breaker.

Going back up front, I enjoyed the size and the placement of the infotainment screen, 10.25-inch right at eye level. Unfortunately, it is not a touch-screen, which took some time to get used to since I was always tempted to reach for the screen, but then I touch it and nothing happens. Mazda says it’s for safety purposes, but it would be way quicker and easier to just tap the screen rather than trying to navigate using the center knob. I was starting to get the hang of it at the end, but a touch-screen would definitely be a great ergonomic improvement. The system itself is great though, and it is easy to find what you’re looking for and the way everything looks, like the colors and the font, adds to the premium feel for some reason. Speaking of premium, the CX-5’s more basic trims are fairly well priced but the higher ones get expensive, around $43,000 for the Signature model, which can get you in a reasonably well-equipped hybrid in other brands.

The CX-5 does offer a driving experience that is hard to compete with, going along with the sporty design and premium interior, the CX-5’s driving experience is very good, and will make you think you’re driving something that’s both pricier and sportier. The suspension is very comfortable but firm, and the direction is rather precise, especially for a compact SUV, it was a surprise to me how fun it was to drive, you really forget what you’re driving. As I said in the beginning, the Signature trim comes standard with the Skyactiv-G 2.5 T, a turbocharged 4-cylinder engine that develops up to 250hp. I said “up to” because Mazda gives you the choice, which is something I can’t recall seeing with any other brands. If you put 93 octane, you get the full 250hp and 320 lb-ft of torque, but you can also put regular 87 octane and get 227hp and 310 lb-ft of torque. The choice is yours, it’s still a peppy engine, either way, 93 just gives you a bit more zoom-zoom.

To conclude, my perception of Mazda changed, thanks to the CX-5, and I would absolutely love to own one, especially with the turbocharged engine. It’s a great-looking SUV with a superb interior that drives sportier than you would think. Other SUVs might offer a roomier cabin, but none of them look better than the Mazda, in my opinion. The only thing that could make it better would be a hybrid option (which is in the works), which is offered by most of its rivals. Other than that, it really is a fantastic SUV.

Previous article2021 CHEVROLET SUBURBAN DURAMAX: Average, but Efficient
Next articleLEARNING HOW TO DRIVE STICK IN A 98′ DODGE NEON R/T