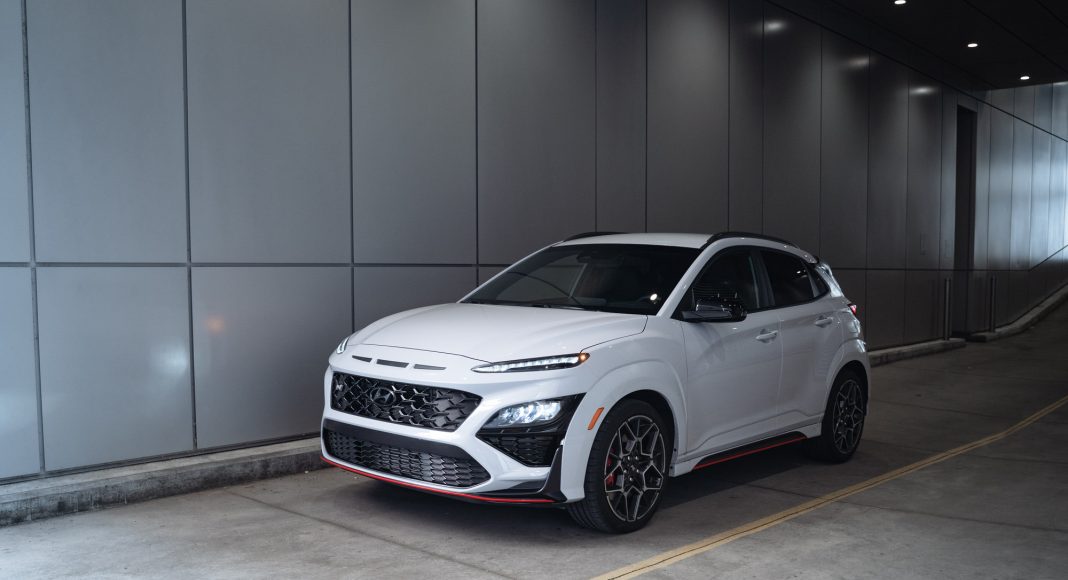 Looking at the current car market, one couldn’t be blamed for thinking there is no room for a new car segment; especially considering the number of cars available, and yet, there was. In the past, Hyundai has never really been known for its performance vehicles, but this is quickly changing with the fairly recent introduction of their N models. It started here in North America in 2019 with the Veloster N, which was conceived by a team led by the former head of BMW M, Albert Bermann. The car had fair success, and even won awards which encouraged Hyundai to announce two other N models for the North-American market, the Elantra N, and the Kona N. Being a compact sedan that’s been tuned for high performance and going against other cars like the Golf GTI/R, the WRX, or the Civic Type R, the Elantra N makes sense, the Kona N on the other hand, absolutely doesn’t. By creating the Kona N, Hyundai pretty much invented the segment of high-performance subcompact crossovers and after driving it, I’m all here for it.

Usually, with my reviews, I keep the powertrain for last, but with the Kona N, it’s too nonsensical not to talk about it right away. Powering this tiny vehicle is the same engine that’s found in the other N models which is a 2.0L turbocharged 4-cylinder that develops 276 horsepower. That number might not seem like a lot in a world where every car seamlessly has 1000 hp, but remember, the Kona is a very small vehicle, it’s shorter than a Corolla and has a curb weight of only 3,340 lbs. This recipe, combined with launch control, allows the Kona N to accelerate from 0 to 100 km/h in 5.5 seconds, which is quicker than a bunch of cars, including the brand-new GTI and WRX. The base Kona is available with AWD but for some odd reason, the Kona N isn’t, which means you’re getting almost 300 hp to the front wheels and an enormous amount of torque steer at lower speeds. I’m not going to lie to you, I’ve never experienced that much torque steer before and it can get dangerous if you’re not paying attention, I can’t believe I’m saying this about a Kona. And that torque steer becomes even worse when you activate “N Grin”, which bumps the power to 286 hp for 20 seconds. Unfortunately, the Kona N is the only one of the three Ns that isn’t offered with a manual transmission, I get it, but it would have been amazing if you could get it with a stick. The engine itself is very good, it offers good power and torque and is very eager at almost any speed. Before jumping to the design, I can’t talk about the engine without talking about the exhaust note, because simply put, it’s hilarious. The pops and bangs are obnoxiously loud and despite as much fun as it was for a few days, I’m sure it would get quite annoying in the long run.

If you manage to convince yourself that you’ve had enough fun and it’s time to park, you’ll realize the Kona N looks pretty cool. Upfront, you get a more aggressive bumper with bigger openings as well as three fake nostrils that are shared with the Kona N-Line, they do look quite cool, though. Also upfront, but not limited to, is a red pinstripe, it starts in front but goes around the entire vehicle, it’s a good way to differentiate the Kona N from the Kona N-Line. Moving to the side, you’ll immediately notice the massive 19-inch wheels which are wrapped in Pirelli P Zero tires. Overkilled? Possibly. Amazing? Certainly. The larger wheels, combined with the tighter steering wheel and suspension, make for a pretty good driving experience, it is fun and handles well. Despite not being as throwable as a Golf, it is surprisingly good. Around back, you get a diffuser, dual exhaust exits, and a spoiler that contains a triangular-shaped third brake light that’s exclusive to the Kona N. For the N and N-Line, Hyundai also removed all of the black plastic cladding that can be found on some lesser Konas, it definitely adds to the performance look of the car.

Sitting inside the Kona, I was surprised by the overall quality of the N improvements, the rest is what you would expect from a subcompact crossover, there’s a lot of cheap-looking plastic, but it is not unlike the competition, it is what I was expecting, no disappointment here. The seats were the first thing to catch my attention, they offer good support while making no major compromise on comfort, perfect for a daily sports vehicle like the Kona N. They are also wrapped in a combination of leather and suede with blue stitching, and that same blue stitching can be found throughout the cabin like on the steering wheel, the parking brake, and the gear selector boot. Speaking of the steering wheel, it is exclusive to the Kona N and features paddle shifters, two N mode buttons in the same blue colour as the stitching, and a button labeled as “NGS”, which stands for “N Grin Shift”, the 10 hp boost mentioned earlier. The first N button, on the left, is a drive mode selector, it does the same thing as the drive mode dial in the center console. The second N button, on the right, puts the Kona in N mode, which is a mode even sportier than sport mode, it puts everything in the sportiest setting possible, accelerator, steering suspension—you get it. This also affects the stability control, which will stay active but won’t intervene as much as it normally would.

Screen-wise, the Kona N comes standard with two of them, both are 10.25 inches. The first one is the digital gauge cluster, it is not very configurable but it’s very easy to read and displays a high-quality image. The second screen is the infotainment screen, it was my first time experiencing Hyundai’s system and I liked it, it’s responsive and easy to use, definitely as good as the competition or better. Unlike the digital cluster, this screen is configurable and you can even display two things at once, which is always a great thing. Leaving the front seats for the rear ones and you’ll notice it’s pretty tight, which is normal for a vehicle in this segment, as previously mentioned, this is shorter than a Corolla. I was happy to see that Hyundai didn’t cheap out on the rear seats, which offer the same leather/suede combination as the front seats. With the rear seats up, you get 544 litres of cargo space, which is less than pretty much every single other SUV in its segment, but it is higher than most hot hatches, like the Golf GTI/R.

In conclusion, the Kona N is a very cool vehicle, it offers great performance in a unique format. It was hard to compare it to other vehicles because it sits between a hot hatch and a subcompact SUV, which I think will be a problem. It offers everything from a hot hatch but can’t be pushed to the same limits as one and isn’t offered with a manual, it also offers everything from a subcompact SUV, but you can’t get AWD and with that body kit, I wouldn’t take it anywhere I wouldn’t take a GTI. In my opinion, the Kona N is something you buy simply because of how insane and hilarious it is, which is why I think Hyundai won’t sell a lot of them, but you can be sure the people who actually buy one, know how amazing it is, and will love it.

If I tell you rare mid-engined European sports car, 18-inch wheels, 47 inches tall, and a center exhaust, what do you think?...
Read more
Journal