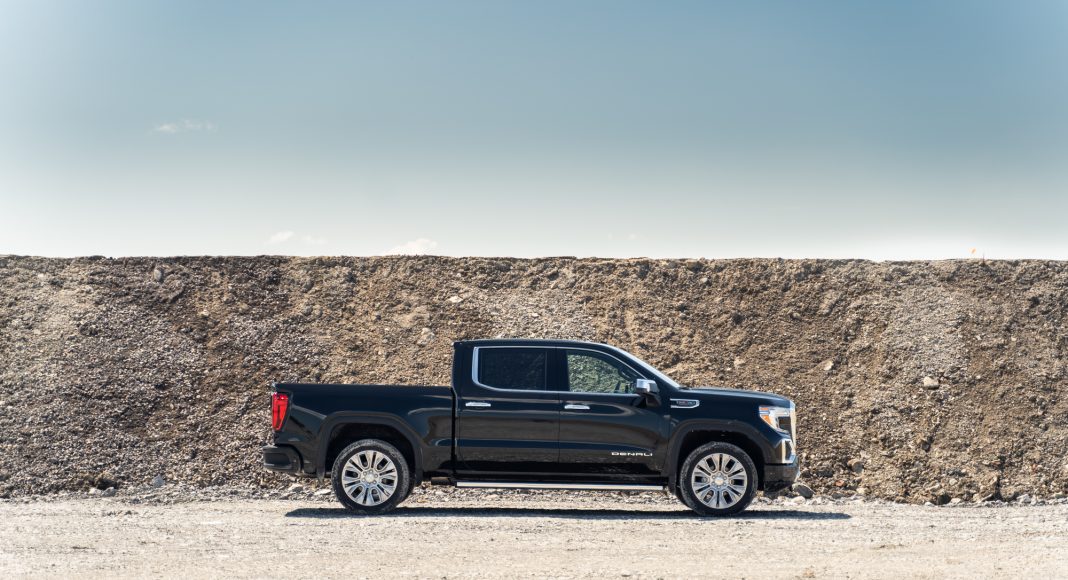 When they were introduced, and for many following decades, pickup trucks were considered as a tool more than anything else, people actually owned two vehicles for that matter! A comfortable wagon or sedan for the family, and the pickup when it’s time to go to work. This period of time is far gone and today, pickup trucks can be used as both your best friend on the construction site and as the perfect vehicle for a road trip with the family. Being tools, trucks were not refined and were in fact very basic vehicles that offered the bare minimum, and even though it’s still possible to go to your local GMC dealership and order a very basic Sierra—with manual windows—that will only be used for work, it’s also possible to get a Sierra Denali, which is what I had for a week.

In GMC’s lineup, the Denali models are the most luxurious vehicles offered, with more equipment and a more refined interior that will make you feel like you’re in a luxury car, and that’s exactly how the 2021 Sierra 1500 Denali made me feel. Standard with the Sierra Denali are the heated and ventilated seats trimmed in Forge perforated leather, the Bose sound system, automatic LED lights, and the Six-Function GMC Multipro Tailgate which I’ll come back to later. The Sierra I was testing was also equipped with close to $15,000 in packages, options and dealer-installed features like the Ultimate package which includes the Multipro Power Steps, the power sunroof, adaptive cruise control and the rear camera mirror, which allows you to look behind you without having your sight of view blocked by whatever is inside the truck. Included in the Ultimate package is the Technology package which includes a top-view camera, very handy when it comes to parking this thing.

If you’re looking to get a fuel-efficient vehicle, this is not the one for you. This particular truck is equipped with the 420 hp 6.2 V8, the optional high-performance exhaust, and the optional, dealer-installed, high-performance air intake. Let’s put it this way, it’s hard to keep your foot off the accelerator and soon enough, you will become best friends with your local gas station staff. I found the gear selector—a very old-school column shifter—to feel pretty cheap and kind of hard to use, I had to be pretty careful to be sure it was in the correct gear.

Inside the GMC, everything is massive, whatever size you are, you’ll fit. Also impressively big were the rear seats, I was very surprised by the amount of leg room found in the back of this truck. You can be a pretty tall adult and still have plenty of room. One thing that wasn’t quite as large was the infotainment screen, at eight inches, it was actually surprisingly small. This Sierra is pretty much fully equipped and it’s impossible to get a bigger screen, oddly enough, the heads-up display is seven inches bigger than that. I don’t get it either. For info, the 2021 Ram 1500 can be equipped with a twelve-inch screen, same thing with the 2021 F-150. That being said, I don’t know if it would really matter in a work truck, but this being the luxurious Denali, I feel like it’s lacking.

Design-wise, well it’s a truck so I wouldn’t call it beautiful, but with the chromed grill and the 22-inch wheels, it does look good and I got way more attention than I thought I would. A big highlight of the Sierra’s exterior is the aforementioned Six-Function GMC Multipro Tailgate which my truck was equipped with. As you can see in the photo below, you can literally transform it into a step that you can use to easily climb into the bed. You can also use it to expand your charging capacity so you can carry longer things, I’ve personally used it as a picnic table, and it was great at that, too. It’s very practical and everyone I showed it to was impressed, and the best thing is that you can also use it as a simple tailgate when you don’t need the other functions.

Finally, and I think this is the most important thing with trucks; brand loyalty. The same way an iPhone user will go back to an iPhone once their phone is old or broken, a GMC guy will go back to a GMC when they want to change their truck. Same thing with a Ram, a Chevy, or a Ford, very rarely they will change their brand. That means that the size of the infotainment screen, or the gaz consumption isn’t really an important factor to a truck buyer, and it would take way more than that for them to go shop somewhere else.

So yeah, I get it now. I’ve never been into pickup trucks more than the next guy, but that was before my week with the Sierra. Yes, they are big and kind of obnoxious, but I don’t mind that anymore. Driving one of these, you feel like you are the king of the road, you’re sitting high, you—more often than not—have a big, loud engine and you have presence, lots of it, and after spending a week behind the wheel of the 2021 GMC Sierra 1500 Denali, I’m a fan of all of those features.